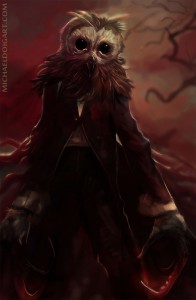 The Owlman is more than a pagan fiction, according to the recently released Gothic horror film, “Lord of Tears.” The Owlman has been spotted around Cornwall for decades, and the cryptid has recently been spotted hunting his next victims on Chatroulette.

Now, the creators of “Lord of Tears” have spotted Owlman stalking potential prey in an abandoned children’s hospital. Where once children with scarlet fever filled the rooms, now the beautifully creepy ruins attract self-guided tourists – explorers, photographers, and artists, alike – who file into the site on a daily basis.

Lucky for us, the crews of Hex Media (the guys behind “Lord of Tears”) set up a series of hidden cameras to capture the reactions of unsuspecting folks as they were traumatized by the Owlman. (Warning: minor bursts of foul language.)

Read more here about SML’s ongoing coverage of the Owlman and his creepy exploits on the web and around the Highlands. Stay tuned for information about Hex Media’s upcoming film “The Unkindness of Ravens.”

And check out the terrifying “scare” video below … if you dare!

Mischievous “House of Monsters” Web Series Looking for a Kickstart
The Summer is Hot, and So is Horror: An SML Horror News Roundup
Hogson Shivers Exclusive