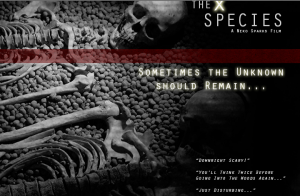 Up-and-coming horror and sci-fi production company, Fear Plus, has recently tipped us off to their newest online film series. “The X Species” premiered online September 21st, and documents the “found footage” of an archaeological expedition gone wrong. It seems that Bigfoot may not be so friendly, after all…

The press release is below, or scroll to the bottom of the post to see the trailer.

The X Species is a new online series that investigates and broadcasts documented cases of paranormal occurrences and first-person “found footage” documentaries.

Deep in the mountains of southwestern Colorado, an elite archaeological expedition is on the verge of a historic discovery. Led by Archaeologist Dr. Sarah Parker, the group uncovers a prehistoric hominid burial site. As the expedition moves forward and press generating evidence is discovered, opposing agendas and interpersonal conflicts arise and the delicate core of unity among the group quickly unravels. When the team’s camp is mysteriously ransacked they find themselves with few defenses against the elements and even fewer resources. Casualties escalate and fear becomes an inevitable descent into insanity as they try to find their way out of the woods. Their fight to survive gives way to fear; for in even these most inhumane of circumstances, the real terror has yet to begin. For on these ancient grounds men become prey…

Filmed in the cinematic tradition of Cloverfield, Blair Witch Project, and more recently, Paranormal Activity 1,2 & 3, The X Species will deliver the bone-chilling viewing experience that horror and science fiction fans have come to expect and embrace.

Established by a group of industry veterans, FearPlus was designed with the fan of horror and science fiction movies and programming in mind. Our content is carefully selected from top producers around the globe. By utilizing a state-of-the-art technology platform combined with easy to navigate On-Demand features, we are able to provide viewers an affordable, unique, viewing experience unlike anything on the web.

Hogson Shivers Exclusive
Is the Moon Still Out of Reach? - Our Kickstarter Wrapup Post
Your Weekend Watchlist: An SML Monster News Wrapup