If You Hate Birds, You’ll Love Supporting “The Unkindness of Ravens”

From owls to ravens, Scottish film auteur Lawrie Brewster unequivocally proves that birds are evil and should not be trusted. His latest feature film, The Unkindness of Ravens, tells the story of a homeless army veteran besieged by an “unkindness” (actually term for a large group) of demonic ravens in the Scottish Highlands.

From the film’s press release:

In the bleak highlands of Scotland, an army veteran must battle his demons in a last desperate bid to reclaim his life and his sanity.

The Unkindness of Ravens was shot on location in Fife and Perthshire, Scotland by a fearless and dedicated Scottish crew led by director Lawrie Brewster. A co-production between Hex Media and Dark Dunes Productions, the film seeks to explore the effect of the horrors of war on the human mind through the media of beautiful poetry and brutal violence.

Also working on the film are writer Sarah Daly, VFX director Michael Brewster, and actor Jamie Scott-Gordon, who plays Andrew Alburn, an army veteran suffering from PTSD who is tortured by recurring flashbacks of a raven-themed trauma. Scott-Gordon sounds like an up-and-coming actor to watch, as he’s also currently starring in the U.S. comedy Bonejangles and U.K. drama Good Intentions. Daly is a young but already accomplished screenwriter. Her work has been performed by Joseph Gordon-Levitt, Anne Hathaway, Gary Oldman, Philip Seymour Hoffman, and Channing Tatum.

Part psychological thriller and part bare-bones horror gore, Ravens is being called an emotionally intense cross between Apocalypse Now and The Evil Dead. The film isn’t yet complete—in fact, an active Kickstarter campaign is trying to raise money to help with post-production costs—but is already gaining attention. The film’s Kickstarter campaign has been endorsed by Alec Gillis of the Academy Award-winning special effects team ADI (Aliens, Predator, Starship Troopers). And Let Us Prey director Brian O’Malley has said of Brewster, “What this guy can do with almost no money is quite astonishing.”

We were impressed by Brewster’s media antics for his previous film, Lord of Tears, and have featured his projects here on SML before. We can only imagine the quality of production that will result when this Kickstarter project meets its goal.

Check out the film’s official trailer and production stills below, then head over to Kickstarter to join on this crowdsourced project.

Shots from the Film: 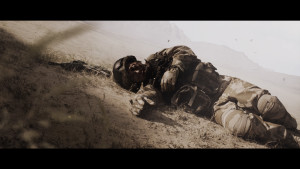 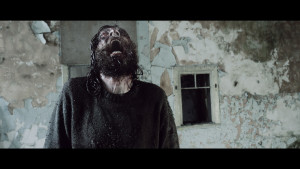 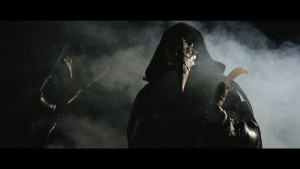 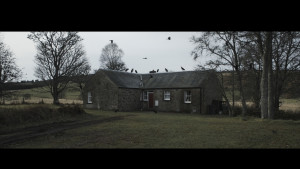 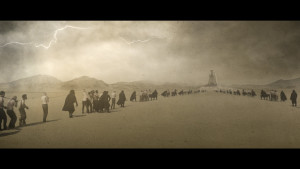