Home Horror Reviews What Happens in College…: An SML Review of “Heir”

What Happens in College…: An SML Review of “Heir” 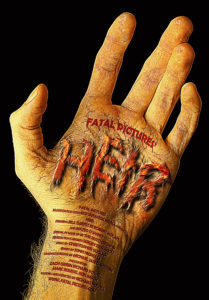 Do you remember when you were in college and you did something that you regretted immediately afterward? Something that haunts you and drives you even now, years later? (Is it just us?) We’re not expressly told what happened between Denis and “Dad” Gordon 20 years ago, but it seems that Gordon is still trying to live it down.

“Heir” (2015) is the latest short film from writer/director Richard Powell and producer Zach Green to reach our in-home cinema here at the SML Haunted Mansion and Blog Laboratory. In 15 short minutes, we’re submerged into the world of Gordon (Robert Nolan), who reluctantly arranges a “play date” between his son and college friend, Denis (Bill Oberst, Jr.). They meet at a diner out of town, but quickly retire to Denis’s apartment.

What happens next is something out of an 80s monster feature or a Lovecraftian tale of terror, but with a heavier underlying metaphor. We won’t spoil it for you. We will say this, though: the film doesn’t literally merit it, but we feel the need to offer a trigger warning to anyone who’s sensitive to storylines about sexual abuse.

Powell and Green have gotten good at what they do. The plot is at once clear and obtuse. The story happens quickly, but is not rushed or hurried. You don’t know whose side to be on, or if there are even sides at all. The horror you feel is as much from your fixed voyeurism as an audience as much as it is from the actions unfolding in front of you.

Nolan and Oberst are cast perfectly: Nolan as the man determined to fight his dark secret regardless of the cost to his own psyche; and Oberst as the man embracing the darkness regardless of the cost to those around him. Like previous short films we’ve reviewed from this team, the audience is visually exposed to Nolan’s thoughts and memories during the course of the action. And, like usual, we’re left feeling a bit grimy afterward. Though this time, the grime is almost palpable.

Check out the trailer for “Heir” below, and keep an eye out for it at film festivals near you.