Imagine you are encircling the distant planet of Gorgulon 7 in your futuristic space ship. It’s time to gather the away team to beam down and explore the exotic surface and fauna. Of course, you need your best crew members. The choices are almost obvious. The ship’s science officer, the ship’s doctor, a communications officer, and that new guy who nobody knows and nobody has seen before. How could we recognize him? He hasn’t even learned how to log onto the computer database yet.

Even though it’s only his third day on the ship, you want to make the new guy feel part of the crew, despite the fact that he lacks the skills and training for such a mission. You are the captain and you know best.

While on the treacherous planet’s surface, this rookie will soon learn that leaving the group and exploring on his own are bad ideas.

The rest of the experienced crew will be fine because otherworldly monsters know this: The lower the rank, the fresher the meat. 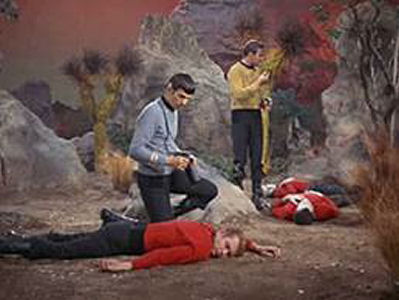